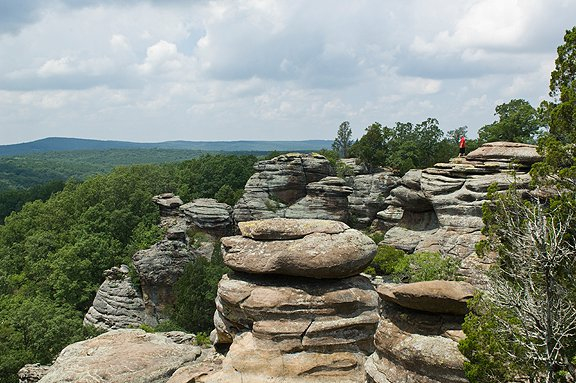 Southern Illinois, commonly known as “Little Egypt”, is surrounded on three out of four sides by the most voluminous rivers in the United States – the Wabash and Ohio rivers to the east and south, and the Mississippi River and its connecting Missouri River to the west.  While portions of this region have the prairie characteristics of Illinois, it is also filled with huge bluffs of sandstone in areas such as Shawnee National Forest, including Giant City State Park and Garden of the Gods. Both areas offer beautiful scenic trails for hiking, camping and picnic opportunities, and more.

In its early years, Southern Illinois was known for its rich economy due to agriculture and its booming coal mining industry.  Immigrants from around the world traveled to this area to work in the mines.  This region, which is the oldest in the state, was once the wealthiest region as well and is known for its rich history and antebellum architecture scattered throughout its small towns and cities.

Today, Southern Illinois is quickly becoming known for its ever-growing wine country.  With 29 wineries within an hour of Carterville, visitors can enjoy free wine tastings and beautiful countryside driving.  On the route, visitors can also experience off-the-beaten path gems such as antique stores, orchards, “dive” restaurants, and more.